If you are in a same-sex relationship you want to look at your tax situation. If you’re legally married, you will have to use a “married” filing status for 2013 when you file your Federal return.  Find out how this will affect your tax bill and see if there are actions you can take before December 31st to save money.

Many same-sex couples are about to discover first-hand the “marriage penalty” written into the tax code. You may find that you’re no longer able to make a tax-deductible IRA contribution because your combined household income is over the limit.  Or, you may discover that your deductions for active rental losses are significantly less than what they were last year.  In past years, some couples were able to take losses of  $25,000 on each partners return for a grand total of $50,000 of losses.  This year under the best circumstances, they will only be able to take $25,000 and in some cases due to income limitations they may not be able to take any of these losses on the current year return and instead the losses will add to their passive loss carryovers.  These are only a few examples of how marriage impacts a tax return.

There are many phase out limits you may bump up against with in your combined return that one of you, or both of you, didn’t encounter before.

On the other hand, if your income levels are different — maybe one of you has no income at all — then you may benefit by paying a lower tax rate on more of your joint income than the single wage earner could in 2012.  Other married rates and limits can help a couple if they have unequal incomes.

For some couples filing as married will be a big deal.  Find out now.  Contact a CPA to see if you’d benefit from a tax projection.  Or, if you do your own taxes, recalculate your 2012 return as “married” for a rough idea of the changes you’ll see in 2013.

Finally, if you’re a same-sex couple considering marriage, do the same review. If you’re envisioning only a small, simple wedding to secure your legal rights, you may decide to get married sooner, in 2013, to receive a break on your taxes. Or, if you discover that you’ll be paying more in taxes after you’re married, you may decide to postpone the nuptials until at least January 1st so you can enjoy the filing single status one more time.

Like so many issues in the complex tax situation we have, there is no universal answer to whether you’ll pay more or less as a married couple.  But, a Fall examination of your taxes could make a big difference next Spring.

Today the Supreme Court declared the Federal Defense of Marriage Act (DOMA) unconstitutional.  That decision, coupled with the Court’s ruling that allows California’s Prop 8 to be thrown out, means that many of our same-sex couple clients will see significant changes in their financial futures.

Social Security benefits, inheritance taxation, and income tax filing — including the taxation of spousal health insurance benefits — will be the same for all married couples.  There will be no separate procedures and rules for heterosexual couples that differ from those that apply to married homosexual couples.

We say…
Today: go celebrate!
Tomorrow: wait for clarification,  but do not wait for very long. 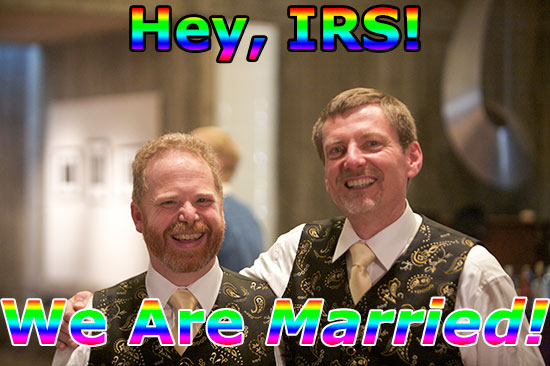 The impact of the Court’s rulings will be clear when the IRS and other governmental agencies have had the time determine how they are going to react.  In the next few weeks, we expect to receive guidance from the government and also from the attorneys employed by the professional services we use.

What’s to figure out?

Well, for example,  the people in a married same-sex couple who lived in California have had to file as “single” and have had to complete complicated schedules that shared some of the income and tax payments with each spouse.  Now that DOMA has been struck down, we expect that in future years the couples will simply file as “married”.  But, we don’t know yet how a same-sex couple who went on extension in April should now file their 2012 taxes.  Will the IRS mandate that these couples file as “married” or can they/should they continue to file as “single” for 2012?

Spousal health insurance benefits will no longer be taxable, and we will be watching to see if companies will recalculate the compensation for employees who received them in the past. Will we be able to/want to file amended returns for same-sex married couples who were forced under DOMA to pay taxes that straight couples escaped?

The effect of the decisions on Registered Domestic Partnerships (RDP) also need clarification.  We, as laypeople, thought the DOMA decision clearly limited itself to people who were married. However, California’s laws have aggressively asserted that RDP’s should be treated as marriages, except for the word “marriage” which Prop 8 forbid.  Since Prop 8 was thrown out, will the IRS or the courts decide that RPD-people also have the Federal rights and responsibilities as married couples do?

These are exciting questions!

Now that DOMA has been tossed out and all loving couple in California are able to marry, many of our clients have the option of getting married and changing their estate and financial documents to reflect full legal equality.  Some will need to adjust their tax planning calculations, too.

If you are a same-sex married couple or RDP, follow what the IRS and courts say.  Talk to us at Sterck Kulik O’Neill and we will share the lastest instructions and rulings.  But, don’t file your 2012 taxes today, and don’t redo your whole estate plan this week.

You will want to take advantage of your new, fully-equal status as soon as we all know how to make that happen.  Give us a call… maybe the week after next!