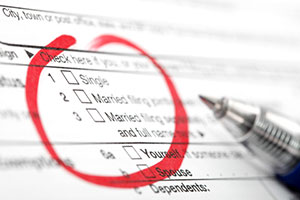 A lot of people are coming into our office this year because they’ve been contacted by the IRS and they want help.

Many new clients have assumed that they’re being audited by the IRS as soon as they saw the envelope in their mail box.  The “Official Business” look intimated them.

Several business owners and individuals I’m working with simply didn’t open the mail from the IRS.  It’s like they thought the IRS would go away if they didn’t read the letter.

That’s the worse thing you can do:  Leave the IRS notice unread!

Some clients first called us when the response date  in the letter is a week or less away!  That gave them and us no time to prepare to meet with the IRS.  Fortunately, the IRS has been flexible in rescheduling meetings and examinations.  We’ve even had some success postponing or reversing asset seizures for tax payers who blew past all deadlines and completely ignored the IRS mailings.   Of course, begging the IRS at the last minute is nerve-wracking, not always successful, and more time consuming than responding in a more relaxed way.

Dealing with the IRS is usually straight forward.

The best thing to do is open the notice right away and discover what you’re dealing with.

Why open the envelope ASAP? Well, if the IRS is correcting your addition and sending you $100, you want to find that out right away.  If there is a small correction the other way, you’ll sleep easier knowing that the matter is minor.

Even a full-blown IRS audit is survivable.  Most IRS agents are focused on doing their job correctly, and they respond well to a clear, logical presentation of facts.

But, open the IRS envelope! If you have to respond to the IRS, give yourself and the professional you engage time to present your information in the best possible light.

We have some more IRS audit tips and FAQ answers online.  If you have more questions post them here, or phone us at 415.433.4500 if you want a more private conversation.