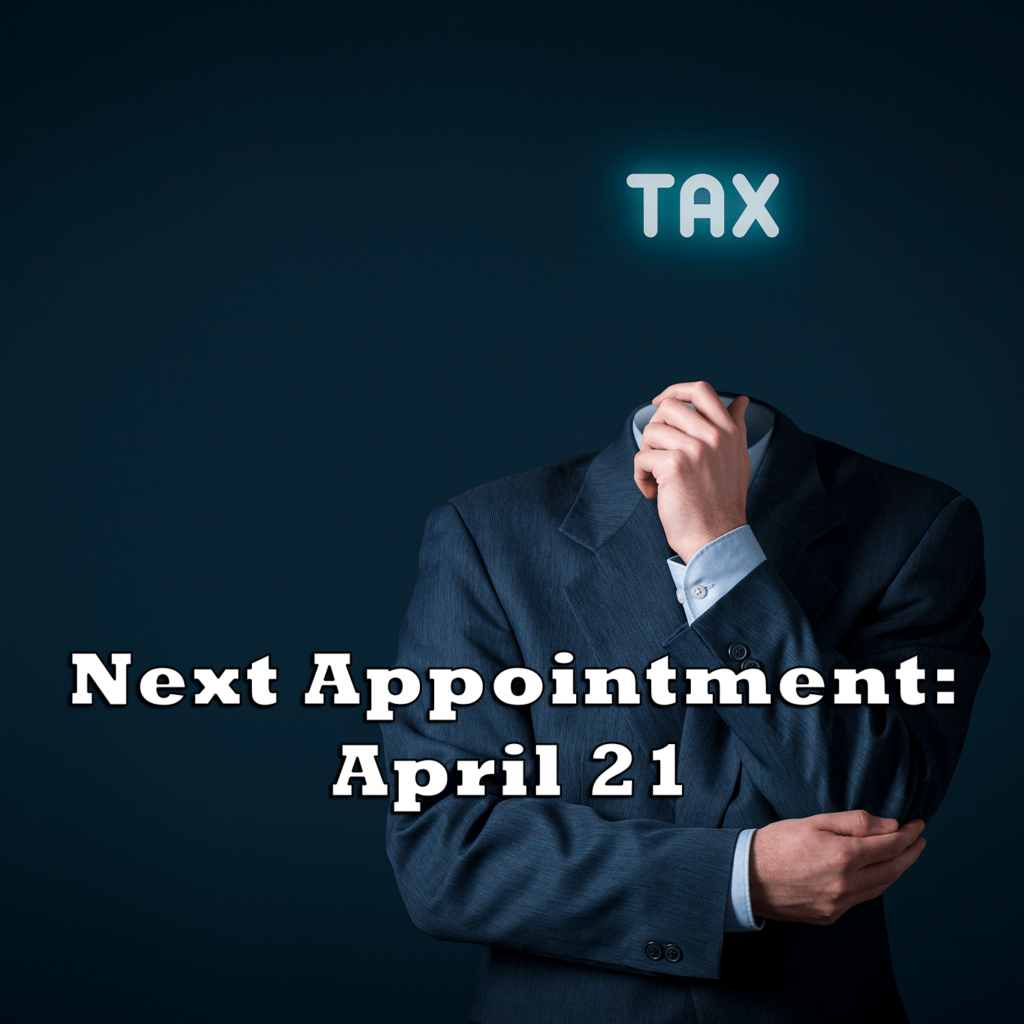 Our team is working seven days a week to prepare taxes and to respond to other accounting emergencies of our existing clients. The partners want to make sure that the team is busy, but not crazed, and are now scheduling meetings for prospective clients after April 20th.

Why April 21st or later? Because the normal deadline, April 15th falls on Saturday, there are holidays in various jurisdictions on Monday, the national tax deadline is April 18th, our office is closed April 19th, and the partners are already booked on April 20th! Whew!

We are happy to schedule an appointment for new clients, but it won’t be before the tax deadline day. If you’re looking for help in preparing your return, give us a call. But, also stay in the good graces of the IRS by submitting an extension request.

Cannot File Your Return — At Least File an Extension

If you haven’t prepared your return and cannot get appropriate help by the April 18th deadline, we strongly suggest that you file an extension with the IRS. The IRS heavily penalizes late filers, but you can get extension to file automatically if you ask for one by April 18th.

Download the Form 4868 from the IRS website, print it, fill it out, and mail it so it gets postmarked April 18th! You can also electronically file an extension request on IRS page in the link.

Filing an extension request will allow you until October 16, 2017 to submit your completed return. You are still required to pay any balance you owe the IRS by April 18th, so if you think you owe taxes make an estimate of what you should pay and send in a check with the extension form.

Whether you plan on getting professional tax help or do it yourself, file the automatic extension request today!

The penalties for failing to pay by April 18th are not so bad, generally 0.5 percent of your unpaid taxes per month, up to a total of 25%.  That is a relatively small penalty, especially compared to the penalty for not filing!

Remember…
The IRS grants an automatic extension to file your tax forms, but the law requires that you pay what you owe by April 18.  So, if you think you may have to pay the IRS this year, enclose a check to cover your estimated shortfall with the extension form.

Sometimes people don’t file their taxes and ignore the tax collector’s notices. To get your attention, the government will create a wildly high estimated tax bill and put a lien on your property.

When we are contacted by clients who have had liens put against them, they are horrified. They were busy, their finances were too complicated that year, or they were worried about the size of what they might owe and they just couldn’t get themselves to deal with the problem.

We — and most reputable accounting firms – can resolve the non-filing complaint, adjust the tax bill, and, if needed, work out a payment plan for the taxes.  The steps to resolution are low-key, routine, and straight forward.

Clearing up the problem isn’t painless.  You’ll have to pay for the taxes owed on your actual income, penalties, interest, and for the tax preparation. Ouch! But, the path to fixing the problem is clear and relatively drama free.

Unfortunately, we have discovered a vulture industry that goes after taxpayers who have trouble with the IRS or state tax collectors.  A client shared with us the blizzard of come-ons he received once the tax lien against him was recorded and made part of the public record.

They are designed to get scared taxpayers to call a phone number without thinking about who they will be talking to.

The language and style they all use is designed to trick you into believing you’ll be talking directly to the government.

The language each of these companies use is remarkably similar. Everything is URGENT, or FINAL.  Several of the notices give a made-up case or file number… a number that has nothing to do with what the real tax collectors are using.  One company says that they’ll get the $377,548 tax bill reduced to $79,509.60… another suggests if you work with them the final bill will be $18,499.85. The warn, if you don’t respond to their notice, your wages will be garnished and bank accounts seized.  (See a larger photo of the frightening notices this one client received.)

A couple letters say that they are from government-sounding organizations such as “The Taxing Authority” or “Tax Group”.  Others don’t tell you who the letter is from… you’re supposed to assume that it’s from the government. A couple even came in envelopes with the official-sounding warning:

$2,000 Fine or 5 Yrs. imprisonment or both for any person who interferes with or obstructs the delivery of this letter or otherwise violates Sec. 18 United States Code 1702.

Doesn’t this warning apply to all mail tampering?!

Some — but not all — of the letters say that they are NOT from an official government agency.  But, those disclaimers are in small type and designed to be overlooked.

We don’t know how any of the companies who send the breathless, fear-mongering notices plan to help solve the taxpayers problem.  But, we really don’t like the attempt to trick people into thinking that they are dealing with a government agency when they are not.

Our advice to people who receive tax notices or who have tax liens placed against their assets: call us or another professional tax preparer who doesn’t try to get new clients by tricking them or making them crazy frightened!